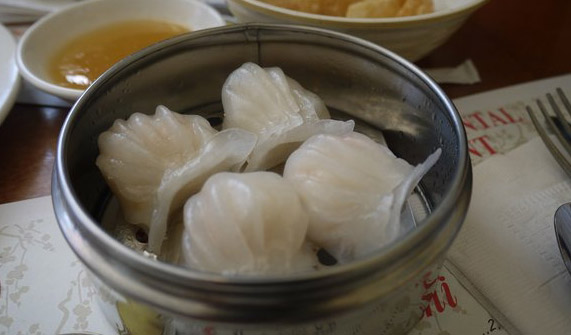 Ordering can be stressful, especially when looking at a large menu. When you’re like me and will eat just about anything, it’s tough to choose. One false move and you’re stuck with a lackluster dish.

As the Food Snob, this scenario rarely happens to me. If ordering were an Olympic sport, I’d win the gold. Yet, there are times when I get food envy. The grass may not taste better on the other side, but occasionally I’m dying to find out.

You can imagine my delight when I caught word that dim sum was being served at the new Sunshine Oriental Restaurant, 121 Loudon Road. Dim sum is hard to find in New Hampshire.

At Sunshine Oriental dim sum is served all day, every day and, like a dim sum plate, the restaurant is small. Readers familiar with dim sum know that plates are brought to the tables on rolling carts. Sunshine Oriental has patrons order off a menu instead.

Our server came to our table with menus and took our drink orders. She asked if we were there to try dim sum. Besides dim sum, Sunshine Oriental has traditional Chinese cuisine and sushi. Our server eagerly offered suggestions.

She immediately recommended the steamed shrimp dumplings ($3.25). “Sure!” we said. I jumped in and asked if we could get the chicken claws ($2.95).

“You want chicken claws?!” she asked, explaining that that although she found the traditional Cantonese dish delectable – it wasn’t for everyone. We were feeling adventurous and stuck with our order.

We also added an order of turnip cakes ($2.95), deep fried sesame balls ($2.95) and the steamed bun sampler which came with our choice of buns ($2.95). Our server suggested the Nai Wong (with a sweet vanilla center), barbeque pork and chicken. And, because we could, we got a sweet potato roll ($4.25) and a spicy salmon roll ($4.55) to get our sushi fix.Our meal came staggered, so we nibbled as it was ready. The sushi was first. The salmon was fresh, and the sweet potato roll was savory and flavorful. After that, plate after plate was placed in front of us, hot from the kitchen.

Whatever it was, it wasn’t bad. It added a nice moisture to the claws, which can sometimes be rubbery. Sunshine Oriental’s, though, were soft and tender, making the difficult-to-eat food (you have to eat it with your hands) easier to manage.

My companion and I split the soft, doughy buns in half so we could sample all three. With a distinct vanilla-flavored center, the Nai Wong was the most memorable, although not my favorite. If you have a sweet tooth, this bun is for you. Both the chicken and pork buns were good, the chicken being my favorite since the barbecued pork was still a little too sweet for my salt-lovin’ self.

The deep-fried sesame balls were also on the sweet side, but I really liked these. The texture reminded me of a chewy donut, and the center’s lotus nut paste had a nice, subtle flavor.The steamed shrimp dumplings were decent. There wasn’t much to them, but the noodle-like wrapper made them ideal for soaking up soy sauce.

We finished with full stomachs and plenty leftover. Our check came to $27.58 – a great deal if you consider all the things we tried.

If you’re in the mood for something unique, give Sunshine Oriental a shot. Dim sum is a great way to expand your culinary horizons without breaking the bank. They even do takeout, so if you’re too proper to gnaw on a chicken claw in public with your bare hands, you can do it in the privacy of your own home.