By Angel Roy aroy@hippopress.com on February 1, 2011 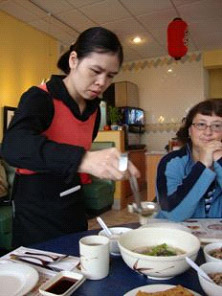 Each wall in the dining room boasts a bold color — yellow, orange, blue.

Photos of blue sky scattered with clouds line the windows, facing in. A woman greets you by name with a big smile.

Tina Tan and her husband Young Zeng opened Sunshine Oriental on Loudon Road in Concord in June with hopes of introducing the city to the Chinese tradition of dim sum. Tan and Zeng first began offering dim sum — Chinese for “small portions” — only on Saturdays, Sundays and Mondays, as printed on their paper placemats, but that was before the dishes hit the ground running.

“Rock and roll,” said Mark Beauchesne, New Hampshire Fish and Game advertising and promotions coordinator, when Tan placed a plate of turnip cakes on the round table that he shared with Fish and Game and Department of Transportation staff.

“We would eat here every day — some weeks we do,” said Sandy Falicon, Fish and Game legislative and rules coordinator.

The fluffy square cakes, made with mashed turnip, are also spotted with Chinese sausage and shrimp. Chinese sausage, Beauchesne explained, is not the bright pink colored sausage found in stores, but a dry sausage cured with grain alcohol.

The many plates of dim sum, selected by Beauchesne, who has learned from Tan how to order the dishes in Chinese, fill the table quickly. Beauchesne recently took his mother to the restaurant so she could reminisce about her trips to Chinatown with her father, who was second-generation Chinese.

“There are some things you don’t forget — experiences and food,” Beauchesne said. “Dim sum is like a family thing — it gets loud — that’s the fun part.” Steamed buns, which Beauchesne called a “lovely little gift,” soon arrived at the table. The buns, filled with barbecue pork, are difficult to make, Tan said, as the proper balance between flour and sugar needs to be found for the dough to rise properly.

“If they are too big, you will see the pork,” Tan said. “You have to balance that.”

It is the technical skills involved in creating dim sum dishes that Tan said usually limits the days it is offered by restaurants.

Many Chinese restaurants choose to offer dim sum only on weekends because people are likely to wait longer for dishes like deep fried sesame balls, steamed pork and shrimp dumplings and the spare ribs with black bean sauce, as all three take a minimum of 15 minutes to prepare and cook.

“You can’t rush the food,” Tan said. “We can’t just prepare it and steam it; we want our food to be more fresh.”

Other popular dim sum dishes include steamed shrimp dumplings, grilled bean curd sheets rolled with shrimp, pork soup with rice noodles and deep fried shrimp taro patties. Traditional sticky rice is served wrapped up in a lotus leaf purse. The only visible difference between the sticky rice, called Nuo Mi, and steamed white rice, Tan said, is that the Nuo Mi grains are longer. The rice is blended with Chinese sausage, chicken, mushroom, pork, shrimp and a special sauce before it is steamed in the leaf, Tan said. Tan would not reveal the ingredients in the restaurant’s special sauce.

“I can’t tell you too much about it because it is a recipe and also because my husband makes it,” she said.

In addition to dim sum and sushi, Sunshine Oriental’s menu boasts other unique offerings created using both family and traditional Chinese recipes. Most of the chef specials are Cantonese-style, Tan said.

“We want to introduce them to authentic food, but it takes time,” Tan said.
To better help those unfamiliar with Asian dishes select at meal, photos of the restaurant’s offerings hang above the counter.

“People can order through their eyes,” Tan said.

All dishes at the restaurant are cooked by Zeng and Tan’s father. Zeng, Tan said, dropped out of school at 16 and has been cooking for almost 15 years now.

“He doesn’t like too much about reading, he likes cooking,” Tan said.

When Zeng’s uncle, a well-known chef in China, moved to the United States, Zeng followed him, wanting to learn how to cook Japanese food and make sushi.

Opening a restaurant, Tan said, was has been a dream of Zeng’s. Before the pair married, Tan said, Zeng told her how much he liked to make and serve food. She saw how helpful he was working for other people at their restaurants and that he knew how to make good Chinese and Japanese food.

“Young has worked very, very hard,” Tan said. “It has been his dream for a long time. That is why we have to try our best.”